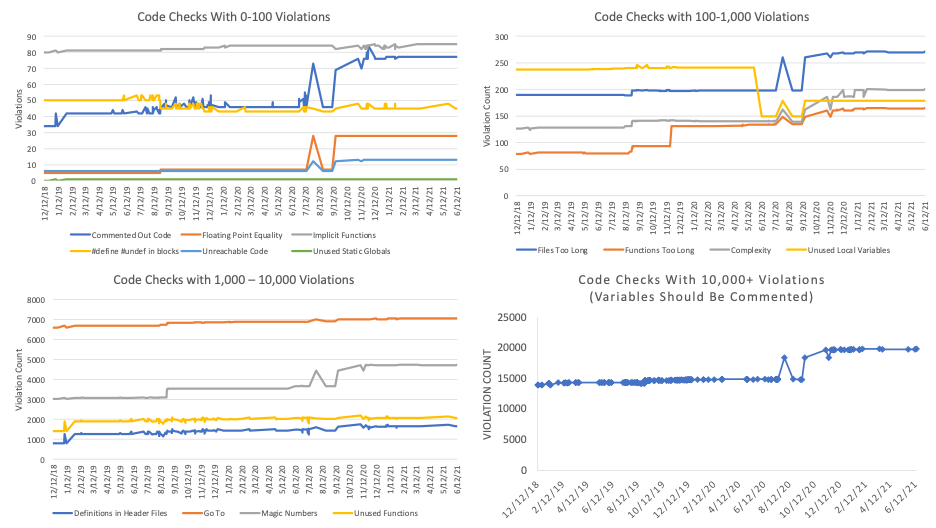 Abstract: Part 3 of a 5 article series about using Understand to analyze how a CMake-based project has changed over time. This article focuses on creating a CodeCheck Violation trend line from multiple databases representing different time points in GitAhead.

Suppose I have a lot of databases representing different time points in my project and I want to know how my project has improved (or worsened) over time. I’m going to track CodeCheck violations as that metrics. First, I need the databases, but luckily I’ve already created them in part 2.

Now I have about two hundred databases and I want to see CodeCheck trends. The first thing I need to decide is what kind of numbers I want at each time point. Ideally, I’ll have a few summary numbers for each database that I can plot over time, similar to the analysis errors and warnings in the previous article. I’ll pick violation counts by check type. So, ideally, for each database, I’d have some numbers like this:

Which checks should I use? To save myself some thinking time, I’ll go with SciTool’s Recommended Checks. I can run the checks from the command line with this command:

Running this on one of the databases took about 125 seconds and produced the following three files:

Of the three code check files, the two text files have a tree-like structure that would be hard to get summary metrics from. Instead, I’ll focus on the csv file. The first two rows are:

I want aggregated statistics by CheckID which is the 7th column (1 based counting). I’m not an expert with awk by any means, but this is a relatively common task. So, with a bit of effort and the assumption that I’m running SciTool’s Recommended Checks, this awk script prints summary values in a comma-separated list for the checks from 0 to 17.

I can run CodeCheck and this awk script for every database and concatenate the results into a table for Microsoft Excel. But, 7 hours is a long time to wait. Is there anything that can be done to shorten the time?

It turns out that CodeCheck is not threaded because the checks are written in Perl or Python and neither language has great threading support. So, my script is only going to be taking 1 CPU and I’m pretty sure I have at least 8. So, I’ll break my list into chunks of about 25 commits and run each script at the same time from different terminals.

For this to work, I need to avoid overwriting the same results directory and summary csv.  I might also want to keep a record of the CodeCheck log since my first database had a bunch of missing file errors to be aware of. Finally, I’ll keep the table file so I don’t have to wait 7 hours if I want to get different CodeCheck information. Here’s an example of the scripts I used:

Combining the tables into my existing spreadsheet by matching commit numbers, I now have columns describing the time point, the analysis, and CodeChecks. I’ve already converted the git log date into an excel date (see the prior article) so I can directly plot the violations.

My next problem is the scale. The “Variables Shall Be Commented” check (#16) has almost 20,000 violations compared to the Unused Static Globals check (#15) which has 1 violation. If I plot all my checks together, I won’t be able to see any changes.

Since this is an after-the-fact analysis of commits that never intended to follow SciTool’s Recommended Checks, it’s not surprising the violations tended to increase as the size of the code base increased. It’s still interesting to note the outliers, though. Both “Unused Local Variables” (#14) and “#define #undef in blocks” (#07) actually decreased over time.

What caused the sharp drop in “Unused Local Variables” around June 2020? The drop corresponds to the following commit fixing QPainterPath includes. This is the same point where analysis errors dropped from 50 to 13 and the files parsed without any errors increased from 298 to 309. The 98 violations that were removed were probably related to QPainterPath local variables. It’s a good reminder that parse accuracy impacts CodeCheck.

In part 4 we’ll look at normalizing these spikes to keep our trends meaninful.